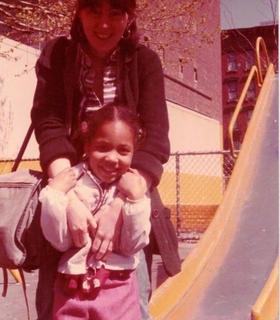 Here's a picture of me and one of the kids in the preschool class I taught, when I first got the idea for this story.

“An exceptionally warm vignette. ‘Manda needs cheering up; her Aunt Ruby makes her come up with a list of the things she likes, and then brings out her own list, which includes everything from changes in weather, to music, to ‘Manda herself. This simple story, told in a colloquial first-person present tense, is seamlessly written; from sentence to sentence and page to page Carr gives rise to the images, sensations and emotions that make ‘Manda’s restored well-being authentic…. each frame fits snugly with the text, and the rhythm and the resonance between them is flawless.” – Kirkus Reviews

“Children who have been down in the dumps will recognize themselves in this high-spirited book that bursts with the exuberance of people enjoying life.” – The Horn Book Guide

“This heartfelt story has a warm and cozy feeling to it and fully succeeds in bringing home the message about appreciating day-to-day things.” – School Library Journal 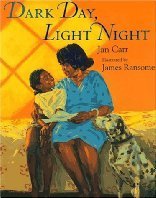 'Manda's having a dark day until Aunt Ruby snuggles up and suggests she makes a list of things she loves. Guess who's top on 'Manda's list? She loves her Aunt Ruby!

This book got lovely reviews (see the column on the left), which made me very happy. Especially because it was the very first hardcover picture book I sold.

But it's interesting for me to think about this book now, many years after it was published in 1996. It had taken me years to write the story, and, after the manuscript was sold to the publishing house, it took another five years for the book to come out. That's not unusual for picture books, since the publishing house has to find an illustrator, and wait for the illustrator to finish other projects before they start. But what that means is that I wrote this book in a time that was different, a time when the world was beginning to be more sensitive to issues around race, but I wasn't as sensitive as I've grown to be today.

Would I write this story now? Not in the same way. Today, I wouldn't presume to tell the story of an African-American character. I would leave that story for others to tell, writers who had actually lived that experience.

This book had multiple inspirations. It was partially inspired by the kids and families I met when I was a preschool teacher. One of the girls lived with her mom, her aunt, her cousins, and her grandmother in a big extended family. Sometimes the girl's mom would pick her up, sometimes her aunt, sometimes her grandmother. That made me want to write a story about a big family that was strong and close and loving.

I also watched the kids in my class struggle with strong feelings, and I indentified, since I'd had those kinds of feelings myself.

I decided to let the main character herself tell the story. In other words, she would tell her story, "I did this, I did that," in her first person voice, instead of the author, or third person voice, saying, "She did this, she did that." Telling stories in first person can help a writer learn about and understand the character.

As I started to write, the narrator revealed herself to be a girl who was African-American, a girl named 'Manda. So when I sold the book, I hoped the publishing house would choose an African-American illustrator. I was extremely lucky that they snagged James Ransome. My editor told me that James would be the one to decide the race of the character. If he felt the voice was African-American, then he could create the paintings to reflect that. If not, we would find out how he pictured the family when he submitted the sketches.

As it turned out, James Ransome did see the characters as I did. Or, I should say, even more vividly. The paintings look so true-to-life they almost look like photographs. James based the characters on actual people in his life – his own family, his neighbors. And it turned out he actually had an Aunt Ruby!

I do continue to love this book. Because I sometimes feel like 'Manda – depressed, or really angry. Do you ever feel like that? And it definitely cheers me up to think about the things I love, and also to feel close to people who care about me, as Aunt Ruby cares about 'Manda.

Years later, this book continues to teach me. Can we, as writers and as human beings, develop more sensitivity to and respect for the experience of others? We can, and with pleasure. Today, I love reading books by other authors who write about their own families and experiences in beautiful and moving ways. And that's something to feel happy about for sure.